Getting started: How to pick & pursue investigative projects

People frequently ask how often I spend months investigating something only to hit a dead end. My answer: Rarely. While investigative reporting is by nature risky business, there are steps you can take at the start to improve the chances of delivering at the end. Here’s an excerpt from an IRE Journal article I wrote while the Washington investigative editor at the Los Angeles Times that outlines a strategy for evaluating and testing project proposals before committing significant time and resources.

The greater a story’s importance, the more time and resources I might be willing to invest in it. So I use a simple graph to plot the relationship between significance and difficulty. While this is usually a mental exercise, plotting the proposal on paper with the reporter might be useful too. 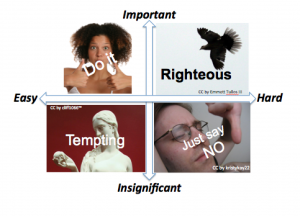 Projects that are important – yet easy to nail – fall into the upper left corner.  Important but difficult to prove? Upper right. Easy but of minor import? Lower left. Tough work that’s inconsequential to readers? “Just-say-no” territory.

The graph is a starting point for a discussion with the reporter. Deciding what makes a project proposal important will involve a fair amount of give and take. Does the problem waste thousands of tax dollars or millions? Does it affect a hundred people or a thousand?

Once the project is charted, you may decide to go ahead with an insignificant but easy story because it’s an exceptionally good yarn. At the other extreme, you may want to do a reality check before embarking on an important project that is exceptionally difficult. This sort of analysis also may help choose between competing proposals or to assess whether to add time and resources to an ongoing reporting effort.

Alan Miller brought two great project ideas to me a few years ago. They both looked challenging yet important enough to justify considerable time and effort. But he could not undertake two major projects at the same time. After he did some scouting on each of them, we concluded that the first proposal involved the threat of serious harm, while the second involved actual and ongoing harm. Actual harm scored higher on our “importance” scale. So ultimately we went with that one. We made a good decision. Miller and Kevin Sack produced a Pulitzer Prize-winning series on the deadly track record of the Marine Corps’ Harrier jet.

We went through that drill when Ken Silverstein and Chuck Neubauer pursued a tip that the daughter of U.S. Rep. Curt Weldon (R-Pa.) had been hired to lobby for East Bloc businessmen receiving political favors from her father. Both reporters receive many more promising leads than they can ever tackle. So we are always looking for the most economical way to weed out the bad from the good.

In this case, we identified three baseline questions and some likely places to find easy answers:

3. Had Weldon done political favors for them? Congressional Record, press

Neubauer and Silverstein decided to check the foreign-agent registration reports first. The law requires lobbyists, public relations consultants and others to provide the Justice Department with names of foreign clients and services provided to them. The reports are available without a Freedom of Information Act request. The office is just a short walk from our Washington bureau, and the reporters figured they might find answers to all three questions there. In fact, the reports confirmed all our baseline facts and provided intriguing leads that guaranteed this would be a successful project.

As a reporter in Seattle, I had a messy pile of tempting leads on my desk, when I received an anonymous tip that two local tribal officials had built a 5,300-square-foot house for themselves through a federal low-income Indian housing program.

As with the other leads, I quickly mapped out the essentials:

Seemed to me the easiest first step was to see if a big house sat where the tipster said it did. So I drove to the reservation.

After passing tracts of tiny houses and old trailers, I found the luxury domicile – and one of the tribal officials. He admitted that he owned it with his wife, who ran the tribe’s housing office. He also told me their house was financed through a bank and not through a federal low-income housing program. Even so, I’d confirmed in less than three hours that two out of three of my essential elements were true. That gave the tip enough credibility to justify spending a little more time to determine if he was telling the truth about the financing.

A subsequent FOIA response showed that the tipster was right on all counts – and the house might be part of a national pattern of abuses in HUD’s tribal housing program. The project grew from there into a nine-month investigation with two other reporters that produced a Pulitzer-winning series.

WHAT: Document the problem What happened? How many affected? What consequences? Examples?

WHY: Determine the cause What and who are responsible?

WHEREFORE: Identify the solution And why isn’t it getting fixed?

Video: National Press Foundation | “‘Shock and Awe’ — How to Dig Up the Real Story”

More Tips & Tools Art of the Investigative Interview Art of the Sensitive Interview Backgrounding & finding people Backgrounding Nonprofits & Companies FOI: A Guide to Freeing Data & Documents Getting started: How to pick & pursue investigative projects InvestigateLocal: DMV Safety tips Verification: If your mother tweets she loves you, check it out